Read the First Part of this story here: How to perform a Sacrifice: 101

My sleep broke quite late in the morning inspite of my best efforts and intentions. I woke up to a lot of noise and hustle outside my room. My brother had already woken up and was munching on some bakery biscuits with homemade tea. He was with my uncle, and they were sitting in the kitchen adjoining the room. My uncle offered me a glass (told you, no cups in the village) of tea with some makeshift breakfast.

“Get fresh after drinking tea, and put on some good clothes. We’ll be going to the temple for the sacrifice in one hour or so,” Uncle said.

“Okay, but can we play with the goats for some time before we go?” I asked with hope. My brother gave me a stern look and then resumed his breakfast. I wondered what was wrong with him.

“There’s no time for that. We’ll have to haste if you want to see the sacrifice,” my uncle replied. I must say I was disappointed, but I figured we’d be able to play all we want in the evening after returning from the temple. We were set to leave the next morning, and as such, I planned on attending every ‘cool’ village event before returning to the city and school life.

I got ready in 20 minutes, and after eating few paranthas with homemade mango pickle, I stepped outside into the mud patio (if there is such a thing) and watched the procession getting ready. In a span of quarter of an hour the space between the houses of my uncle and his brothers had filled with a horde of people conversing loudly and impatiently. They were all getting a bit restless, due to the sun, I reckoned. However, my mother told me they were actually worried that we might not make it to the temple in time and miss the muhurat or the auspicious time for sacrifice.

I found it quite strange. The other week I had to have a dentist’s appointment, and when we reached a little late, we had to wait for 4 hours before the furious doctor let us in. I figured God must work the same way. After all, God is one, and he must have to attend all the sacrifices in the state of Himachal Pradesh. Not to mention other states too, and the whole wide world.

Leading the procession was my cousin uncle Sukhram, with the rifle all loaded up and ready. My other uncle was making sure they had all the right ingredients and things needed for the ritual. After 10 minutes of fidgeting and asking if everyone was ready, the procession started moving with a loud bang from the rifle, signaling that the holy walk to the temple had begun. 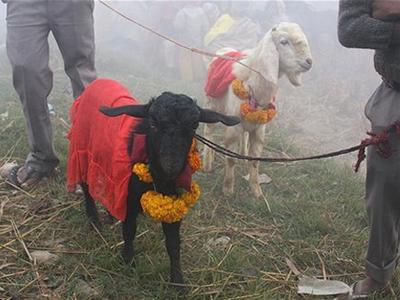 Somewhere in the middle I, my mother, and my brother were walking; chatting amongst ourselves. When I say chatting I mean my mom and me, as my brother was awfully silent. He did this often after every fortnight or so trying to gain attention for himself. After all, I was the younger one and got all the attention that I so deserved, and he didn’t. In the scorching heat and cobbled stone path we walked with care, all but oblivious to the burning incense and ritualistic songs being sung in the front of the procession. A priest with a bald head and ponytail was walking beside my uncle, invoking all the forest spirits with his loud incantations, and perhaps some wild animals too. Every other five minutes he would speak something in my uncle’s ear, and he would respond with some strange movements or words, howling into the air or looking up to the sky.

Walking with the poise and gait of a tiger prowling amongst his dominion, Sukhram uncle continued to walk in front of the procession. He shot from the rifle whenever we reached a supposedly strategic spot or a fork in the road; and then reloaded. His body language suggested he thought of himself as the chief of the procession, which I doubted he was. He was quite certainly known to behave like a buffoon in the village and trying to be the center of attraction everywhere. Honestly, I couldn’t understand anything they were doing, but I was enjoying their strange gestures.

Other than that, I could barely see what the supposed elders were doing in front of the crowd of fifty people. The priest was uttering holy mantras meant to invite all the local forest spirits as well as the gods like the trinity of Shiva, Vishnu, and Brahma along with the nine planets. I say local because every village in the mountains has their own set of spirits and gods and goddesses that they have to worship, sometimes compulsorily.

The procession reached the temple in forty-five minutes. We three were in the rear with the ladies and the children, and hence were standing outside the temple. I was searching for my uncle but to no avail. I was excited to see what would happen and how the ritual would proceed. My mother and I were searching for a chance to get hold of any of my uncles and get acquainted with the supposed complicated procedure of the sacrifice or Bali.

My brother Vishal was sitting under a large banyan tree sulking for a reason unknown to the universe. He had a lost expression on his face and a hardened scowl on his lips. I could’ve just asked him what exactly his problem was, but I was preoccupied with the new found anxiety of witnessing a sacrifice. I was continuously gazing towards the entrance of the temple where fifty or sixty people had gathered. They were surely as eager about the sacrifice as I was. Atleast that’s what I thought.

Until I saw Bittoo, that is. Sukhram uncle was holding his leash with one hand and putting vermillion on his forehead with the other. To be honest, I was not shocked. I was just confused. I thought there was a mistake. They were playing with Bittoo when they needed to prepare for the sacrifice. Then I saw my uncle standing in the corner with a long and curved blade in his hand extended towards the Pandit, who was washing the blade with water. He was speaking something inaudible which surely were some more incantations.

It dawned on me. I turned back and looked at my brother. He had a look of remorse mixed with anger. But underneath that he was hiding an expression of sadness and shock. The same one I had on my face at that time. It may seem childish –which it was- but only at that moment I realized what was really going on. They were going to kill Bittoo and that too for a ritual I no longer cared about.

Stay Tuned for the third and final part.