Rains in the mountains are always majestic to watch. Even in the sweltering summers, you can get drenched in the periodic -not occasional- downpour of the clouds meandering to the plains in search of an escape from the rolling hills of Himachal. My grandfather always told me that the monsoon clouds come from the South in Spring. After getting reflected by the mighty Himalayas up North where we lived, they bounced back and returned during the summers to give the people of mountains –the favorite of the gods- some respite from the heat and humidity.

Sitting in my balcony as I gaze upon these famous summer rains I feel positively amused. After three days of piercing sunlight came the clouds from the North –from the direction of Shimla- sauntering slowly towards the Southern direction. The valley between the two hills got illuminated by sunlight from one side and an eerie but strangely soothing darkness from the other side. In the North, the clouds covered the mighty hills, and in the South, the sun who was busy playing hide and seek in the clouds threw a spotlight on the same hills. It felt like the sun and clouds were having a contest where one was challenging the other on the effect they could have on the mountainside.

Amidst this hide and seek, when the first droplets hit the ground, the aroma of earth and the mud sway and rise up into the air. The aroma refreshes my mind, which the heat had sidetracked for the last few days. With short bursts of heavy rain, the clouds make their presence felt. They then gather around in a corner as if conspiring as to what they should do next to get the attention of the people living in this small hill station, whose name no one knows. 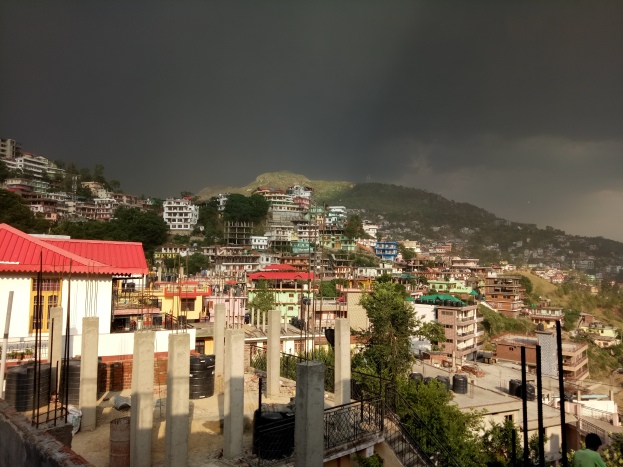 The rain falls slowly on the ground and on the tin roofs making a soothing sound. The clouds grumbling in gradual agreement continue to let loose the droplets of water and gaining everyone’s attention with the occasional thunder. Slowly and steadily the soft drops of rain change into something bigger and heavier. Next thing you know, a string of hail is falling down from the heavens, full of force and drowning even the sound of lightening. The clap of thunder -now a bit too frequent- feels like a drum playing in the foreground of the loud noise created by hail falling on tin rooftops. There are more simple roofs than the triangular tin roofs, but the sound of the rain thumping down on the steel supersedes every sound. Suddenly the surrounding roofs which were dry until the morning have filled up to the brim with water and melting hail. The vision has receded down to a few feet amidst the torrential downpour, and the summits of both the giant mountains have been covered by fog. If you look closely and deeply into the heart of the beautiful mountainside, you can actually see the raindrops mixed with the hail, falling down with a loud commotion but a captivating background. And just when you think it can’t get any better a ray of sunshine pierces through the cloud cover from the west side, and the setting sun with the final adieu presents a beautiful rainbow to the residents of this rainy hill station.

The rainy day takes away all the sweltering heat and the uneasiness that comes with it. One day people are complaining about the mind-boggling heat and piercing sunlight, and the next day children returning from school are dancing away in the rain and trotting, nay swimming in ponds which have replaced the cemented roads that lead to their home. Their parents coming back from work would be swimming in the same roads, or more probably tucked in their offices against their will for unlike the children they have stopped liking the rain. They have stopped dancing in the rain not caring for the world because they think they have responsibilities; not knowing the children for whom they are responsible for are playing in the same rain and waiting for them to come home so that they can chirp at them how cool and how wet perhaps their day was. A sparkle surely breaks down in their eyes when they remember the time they were children. The time when there were no high-rise buildings in Solan, and they too walked back to their homes from as far as five kilometers. They too enjoyed the rain amongst the pristine and virgin mountains taking delight in the very frenzy and freedom they discourage in their children. Like any grown up, wrapped in the cocoon of their supposed maturity and old age they have forgotten how refreshing and invigorating, the rain of Solan used to be and still continues to be. Solan, the place between the two mountains. 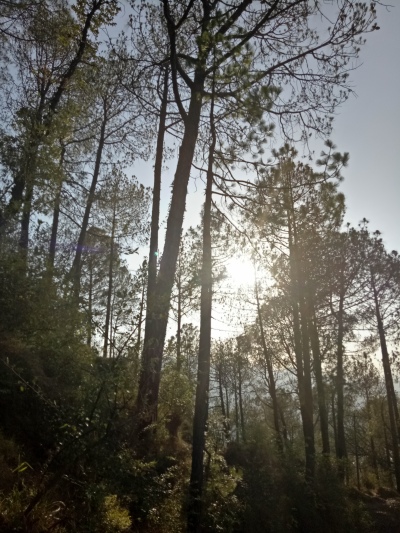 There is nothing special about Solan; not for anybody else, I mean. But for us who live here, these small but important secrets make us privy to a kind of beauty no one dares to lay claim to. The narrow pathways winding from the summit to the river lying at the bottom, tall pine trees standing proudly at the ridges of the hills and of course the aroma of the first summer rain. These are secrets that no tourist or outsider knows about. People come here in search of solace, which they try to find in tourist places like Shimla and Manali or the snow capped mountains lying further North. They don’t know that the real beauty lies in the suburbs. The small towns of Solan, Mandi, and even Dharamshala which don’t boast their beauty to the whole world. Bereft from the touch of humans they lie pristine and true to the legacy they protect.

Here in Solan, among the people lazing around in their homes and the people jollying in their workplace; lie the mountains, trees, clouds, and the nature playing with each other vying for the attention of the onlookers. They maintain and commemorate the grace of the Gods that has been so gratefully received by this place called the Land of Gods.

When you throw the small and closely packed houses with the infamous corrugated tin roofs into the mix, what you get is nothing short of an Italian countryside. What remains are the tourists who I am thankful are not many in Solan. Without any hustle or bustle of people trying to get selfies and photographs which they think are important but aren’t really, the rains feel even more special. It’s as if only a handful of people are worthy enough to witness the trio of rain, sunlight, and mountains in action. The beasts of nature and the destroyers of it all come in unison to observe this strange trio hiding and lurking in the corners of the mountain landscape. A nimble wind and an occasional but majestic clap of thunder fill the atmosphere with an electric feeling; sweeping people’s hairs who are out in the open, and inviting those who are resting inside their abodes.

There is a reason why this place is called the Land of Gods. It’s not because of the plethora of temples built around every corner of Himachal. No. It’s because the Gods have smiled and forever continue to do so with all their might upon the residents of this small but picturesque state of India. A place which no one pays heed to but every person falls in line awing at, every time you open your mouth to tell them you belong to that heaven. That place everyone knows but nobody appreciates. The place which gives a lot but never asks for anything in return. The place we call the Land of Gods.

Chirping of the Birds