The fans have spoken. The entire country has spoken. Shows are getting booked days in advance with the fans unabated by the hefty prices being charged especially for this movie. Multiplexes in Chandigarh and Delhi are screening close to 20 shows in one day. Even the cinema hall in my hometown Solan is showing 9 shows every day. How’s that even possible? I have no idea. 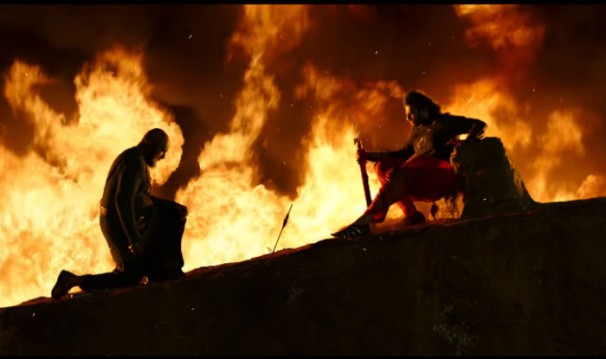 Why did Kattappa kill Bahubali?
Everybody inside and outside the theaters is dying to find out the answer to the question that has been ringing in the ears of fans since two years.

How would the son of Bahubali reclaim the throne he rightfully deserves?
Even when everyone knew the movie would end with Bahubali’s son killing Bhallala Deva, everybody flocked to the theaters in utter devotion and frenzy to witness the record smasher conclusion to the saga that started two years ago.

For people who don’t know, Bahubali: The Conclusion released worldwide on Friday. With 9000 screens only in India it made INR 121 Crore in one day. IN ONE DAY? I’m sure this breaks any and every first day records for the Indian box-office. Also, I’m pretty confident that in the coming days and weeks this movie will continue thundering across the world clocking the total around 800 crore domestically and even more internationally.

The movie starts with a song portraying the sculptures of all the major characters: Sivagami holding baby Bahubali, Bahubali prowling across the battlefield, the iconic scene of Kattappa killing Bahubali and much more. Why you may ask, did I mention this irrelevant detail? It’s because the heritage of Bahubali franchise, even if two years old, is etched in the memories of the audience all over India. And these sculptures are a step towards making those memories eternal.

The story picks up where it left off in the iconic first part. The war with Kalkeya has ended, and Bahubali is set to be sworn in as the king. But before that, he has to travel his kingdom and try to ascertain the problems of his subjects with a first-hand experience. Little does he know that during that visit he will find the girl of his dreams. 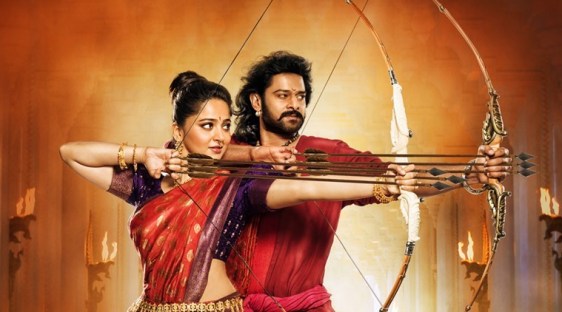 Or perhaps it would be more apt to say Queen of the dreams. Too soon?

Devasena consistent with her strong name presents a powerful personality. Fending off some goons she swords her way right through the heart of Bahubali. After that, he tries to win her heart over and succeeds unsurprisingly.

The first half, although slow is quite entertaining with the sweet but bold love story of Bahubali and Devasena,  mixed with eye-catching special effects and dazzling fight sequences. The garnishing of VFX I must say is quite impressive and adds on to the beauty of the cast and intensity of the plot.

After the kickstart with the love story of Devasena and Bahubali there comes a huge twist which I’m sure nobody would anticipate. Infact I’m pretty sure few would be able to predict the periodic twists and turns that come in the movie. The plot is quite mysterious, complex, and tough to anticipate; which only adds to the flavors. I literally gave up guessing after a few minutes. One one side Sivagami promises Devasena to Bhallala Deva as his wife, and on other Bahubali promises Devasena that he would allow no one to disrespect her.

It’s always been about the crown.

A clash of two promises happens followed by a sacrifice which ends up Bahubali becoming the Commander of the Mahishmati army and Bhallala Deva the king. But even that is not enough for Bhallala and his father, for they know as long as Bahubali is alive he would be loved and revered by the whole kingdom. Even after a false allegation makes Devasena stand in the court in shackles and Bahubali who replies in kind gets thrown out of the royal castle, the people still love him. Even after becoming a common man, Bahubali is worshiped as a god, which meant that only his death could fulfill Bhallala’s dream of becoming the undisputed king. Or could it?

The first half and a good part of the second half is covered by the flashback with Kattappa telling Mahendra aka Shiva the story of his father and how ultimately Kattappa had to kill Bahubali with his own hands. However, the burning question doesn’t get answered till we are good two hours into the movie. Before that is a rainbow of romance, action, comedy, and some pretty good and enchanting dance numbers.

The buildup to the point of Bahubali getting killed was so much that I had anticipated the actual reason for Kattappa killing Bahubali would be quite disappointing. But it didn’t disappoint, much. Kattappa apparently had to kill Bahubali with his own hands because it was the command of his king at the time, Bhallala Deva and moreover of Bahubali’s loving mother, Sivagami Devi. Sivagami who vowed never to let anything happen to the throne of Mahishmati gave the order under the false assumption that Bahubali was trying to kill the king. Bhallala uses a close friend of Bahubali create this illusion. The result? Bahubali is vanquished at the hands of his own loving Mama who has vowed never to defy a direct order of the throne.

Of course, even after Bahubali dies the subjects are not under Bhallala’s control. After Sivagami realizes her mistake, she proclaims the newly born son of Bahubali as the new king, even when Bhallala is alive. This, of course, incites the anger of the wannabe king and gets us to Sivagami getting killed and the story of the flashback wrapped up.

Bahubali – King of the People

I might have to agree that the actual reason of Kattappa killing Bahubali was a little bit disappointing -stress on little- but the loss was made up by the iconic final fight between Bahubali’ss on Mahendra Bahubali and Bhallala Deva.

A Lesson to Learn

Trying to not sound partial –Okay I am partial- never has a South-Indian movie garnered acclamation on this scale. And for a good reason too. I couldn’t help comparing Bahubali with Hollywood war era movies like Troy and 300, simply because it has no competition in India. The level at which due attention has been given to character-development, set design, and fight sequences is unprecedented for India.

So much so that, in my opinion, the movie makers of Bollywood -so-called king of Indian cinema- should take some lessons on film-making from S.S. Rajamouli. And yes, I’m including major studios like Dharma Productions, Disney, and even Yashraj on the list. India’s history is ripe with iconic stories and timelines waiting to be explored and exploited. Still, Bollywood is busy making movies like Mohenjodaro, Befikre, and Rangoon which have no rhyme or reason, but hopes of getting twenty-something Oscars. We need movies like these and more actors like these.

After almost 6 or 7 years I have seen the kind of audience response that this movie has gotten. To start off, the hall was filled up to capacity. Even before the film started, the people were chirping inside the lobby discussing different aspects and crunch points of the plot. Of course on everyone’s lips was the most famous question that has been repeated even more than the question Why is Melody so chocolaty? 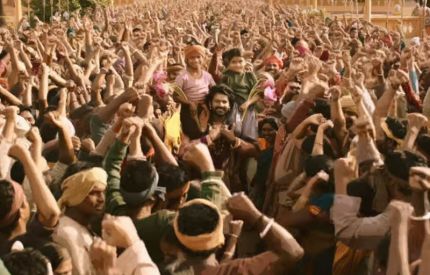 That, however, didn’t mean that audience didn’t enjoy other scenes. Not at all. People were shouting and whistling and hooting not only at the entry of Bahubali and Devasena but also for fringe characters, minor plot twists, and even comedy scenes. They were laughing at the silly jokes, swooning over the romantic story, and awing at the plot twists. Every person in the theater was engaged, buried under the spell of the moviemakers. In a small 100 seater cinema hall the voices were as loud and as reverberating as any big multiplex. I felt like I was back in 2006 watching Krrish amidst adults behaving like kids. Immersed in the movie, they were living it not just watching it.

A Great Finish to a Great Story

There is a sudden lapse of continuity and intensity of the movie after the flashback finishes. The movie starts to get buried under its own expectations. The son of Bahubali who had no weapon training all his life starts fighting and killing the enemy just like his father. He even starts thinking like him, which is kind of a letdown after such a calculated and well thought off buildup to the climax. I personally believe that it wouldn’t have been a waste to let the movie go a little bit longer or even add a third part to make the series a trilogy. It would’ve given the much needed time for the director and screenwriter to build Mahendra’s and Avantika’s character correctly and make the final face-off a vibrant and colorful experience for the audience.

The Final Promise, The Final Battle

Thankfully, the final fight scene between Bhallala Deva and Bahubali more than makes up for the low point. Mahendra Bahubali, the only son of Amarendra Bahubali and the rightful heir to the throne, comes to exact his vengeance. He comes to fulfill the final promise that he made to his mother Devasena and entire Mahishmati. The promise to uplift them from the violence of Bhallala Deva. I still believe though that the ending was rushed and looked a shoddy job, especially if you compare it to the entire story preceding it. Whatever may be the case, and however anyone including me found
this movie, they can’t deny that this film and this franchise deserves every bit of success, praise, and love that is coming its way.