The story of Lord Shiva started millennia ago. Don’t worry we are not going that back although that story is an integral part of this one. Shiva is considered to be the lord of the universe in what we call Hindu mythology but is actually a historical perspective passed down through various civilizations of the Indian subcontinent. Erroneously considered to be the god of destruction, Shiva is the Hindu god of transformation responsible for transforming a universe into a new one. That inevitably requires him to destroy the old one, thus giving him the reputation of a destroyer.

Temples devoted to Lord Shiva and his many forms are scattered all over India. However, in the North Indian state of Himachal Pradesh, he holds special importance, for his abode Mount Kailash lies in its heart. Consequently, Himachal has thousands of temples devoted to Shiva; one of which is situated in Kullu district atop a trekkable yet steep hill. This hill known as Bijli Mahadeva is one of the best-kept secrets of the Land of Gods.

Located in the Kullu Valley of Himachal Pradesh, Bijli Mahadeva is around 6 hours from the union territory of Chandigarh and approximately 11 hours by road from New Delhi. It is situated at an altitude of 2460m from sea level and is a picturesque tourist site even without taking into account the legendary story behind its origin. But we are pretty interested in that story. Or atleast I am.

Technically Bijli Mahadeva is the name of the temple on the summit of the mountain dedicated to Mahadeva, a form of Lord Shiva or rather of whom Lord Shiva is an incarnation. However, the tourists and even some of the locals call the mountain itself as Bijli Mahadeva. The trek consists of 3 km walking, that is enough to quench the thirst of any adventure seeker or mountaineer in the making.

As we discussed Mahadeva is a higher form of Lord Shiva, and Bijli in Devanagari script means lightning. The temple situated on the top of the hills is hence quite rightly called Bijli Mahadeva or ‘Lord of Lightening’ for the deep relation it has with lightning and thunderstorms. The city of Kullu including the surrounding areas of Northern Himachal are prone to heavy thunderstorms during the rainy season and the winters. The Kullu and Mandi districts even suffer from the infamous Himalayan cloudbursts which douse cities and villages alike with a torrential downpour of rainfall.

As you reach the top of the mountain, you are welcomed by a panoramic view of the surrounding mountains, all dwarfed by the immensity of one single mythic mountain. In the middle of the temple compound lies a 60-foot tall wooden staff known as the Staff of Mahadeva. Directly beneath the staff is the small and humble abode of the God of lightening. Inside the temple lies the sanctum sanctorum, which houses a stone Shivalinga. For those who don’t know, a Shivalinga is an idol for worship typically made up of black stone. Shiva, unlike other Hindu deities, is generally represented by the Shivalinga, instead of stone idols representing his humanoid form. This is because the shivalinga depicts the transformational energy that Shiva controls and is ultimately responsible for transforming one universe into another.

The scenic beauty is captivating and the chilly mountain air that strikes your face as you ascend the steep mountain enthralling. However, the story that takes up home inside your mind and resonates all across the Kullu valley is the mythical story attached to the ancient abode of Mahadeva. The local legend goes that every year during the rainy season, lightning attracted by the staff breaks the Shivalinga situated inside the temple into many pieces. The broken pieces of the stone Shivalinga due to the immense force of the thunderstorm get lost into the deep forest on the sides of the mountain. The same night the pujari or the priest of the temple receives a dream in which Mahadeva himself tells him the location of all the pieces of the Shivalinga.

The next morning after collecting all the pieces the pujari rejoins the Shivalinga using butter and sattu (cornflour). The Shivalinga becomes whole again; all set to conquer the wonders of the plethora of people who visit the temple. Every year the Shivalinga breaks and is rejoined. It is renewed every time, signifying the transformation of one life into another and one world into another. This cycle of breaking and rejoining is the reason Bijli Mahadeva is quite closely associated with Shiva, the Hindu God of Transformation. 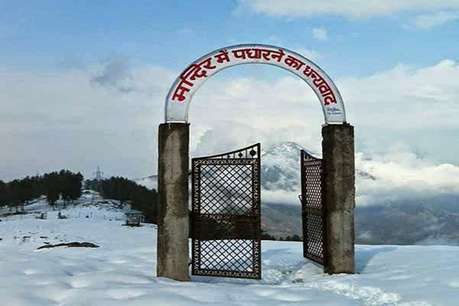 The story might sound like a farfetched tale concocted to suit the fantasies of the hillfolk, but for the people of Himachal, it’s a way of life. The small temple and the trek thereof is a closely guarded secret of the Kullu valley. You’ll hardly see the string of tourists in this holy abode of Mahadeva as you do in its better-known hill stations like Manali or Shimla. The story of Bijli Mahadeva very aptly demonstrates that there are many places hidden all over the world in plain sight which can teach us a lot about life and everything beyond. They are visible to people who are searching for something different in life; something other than the routine life and the regular visits to overcrowded tourists destinations like Switzerland and Italy. Bijli Mahadeva might seem like a hillock with little significance to the horde of tourists who visit Himachal every year, but it is nothing short of a minor pilgrimage for the residents of the Land of Gods.