The movie of the year, Thor: Ragnarok is here. The wait is over, and the audience is flocking towards the theater to witness the end of days. Scary as it may sound, the movie is nowhere near frightening or frostbitten like its name suggests. Besides being the third addition in the Thor series, Ragnarok is also the latest addition to the Marvel Cinematic Universe. And I know what questions are crowding your mind at this moment.

Does it do justice to all the hype surrounding it? Absolutely.

Does it make you long for the Infinity War trailer more? You bet your ass it does.

Does it make a hole in your pocket? Of course. What kind of a question is that?

But it is totally worth it. Unlike the two previous Thor movies, Ragnarok under the able direction of Taika Waititi embraces the fun element that the Marvel Movies have become famous for. It utilizes to perfection its star-studded cast, not leaving the viewer bored even for one second. Acting giants like Cate Blanchett, Jeff Goldblum, and Anthony Hopkins contribute adequately to the entertainment quotient of the movie without shadowing the tremendous performances by Chris Hemsworth and Mark Ruffalo. All in all, it is a complete entertainment package which will force you to say “Shut up and take my money.”

The movie starts with tying up loose ends. It confronts many unanswered questions from the previous movies involving Thor, i.e. ‘Thor: The Dark World’ and ‘Avengers: Age of Ultron.’ The movie through a monologue and path-walking of 20 minutes or so, answers queries like where was Hulk for the last two years, where Odin was since the end of Thor: The Dark World, and of course what has been Thor doing in the meantime. It even connects with the Dr. Strange through a Benedict Cumberbatch cameo and hints at the involvement of the sorcerer supreme in the scheme fo things. That’s about it with the background information. For a detailed itinerary of the questions that were hanging over our heads prior to this movie, please read Thor: Ragnarok Trailer Breakdown.

The movie jumpstarts with the death of a major character and entry of another. Former is something I’ll allow you to find out on yourself. Latter, however, is not a mystery. Hela, the Goddess of death enters the compendium of heroes and that too in style. She arrives at Asgard and starts destroying everything; her first victim being Mjolnir (it’s the name of Thor’s hammer you puny mortals). Hela then proceeds to claim the seat of Asgard for herself and banishes Thor and Loki. Yup, Loki is with Thor at the time. After that starts an Odyssey level reckoning of Thor. 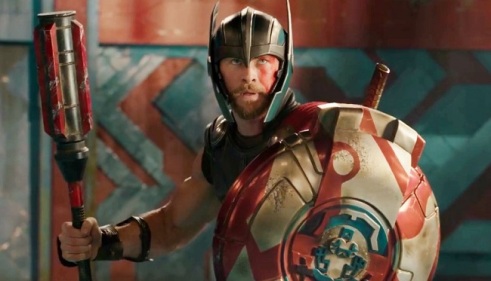 After getting banished from his home, Thor ends up on the planet of Sakaar. He is planning on taking vengeance from Hela, but the way back to Asgard is laden with difficulties, monsters waiting to bite you, and evil maniacs. However, the path of redemption is not only waiting for Thor but also for Hulk. Thor meets Hulk in Sakaar who hasn’t had any communication with Earth or the Avengers since last two years.

Hulk has been fighting for the Grandmaster (Jeff Goldblum) at the main event of the Battle of Champions. Thor and Hulk don’t meet in friendly circumstances. Thor is chosen to fight Grandmaster’s champion who is none other than Hulk himself. Who wins the fight doesn’t matter (I’m just sparing your from spoilers, Of course, it matters). What matters is that as soon as Hulk comes in his Banner form and realizes what is going on, the dynamic duo joins hands and escapes. That is however not before they form an able team with the help of Valkyrie and Loki.

“What were you the God of again?”

Jokes aside, the scene where Thor turns full electric and rains lightening on Hela, is something to behold. Thor has, at last, realized that he doesn’t need his hammer to use his powers. He is the God of Thunder even without Mjolnir. In Odin’s words, Thor only ever required his hammer to focus and concentrate his power, not to actually use it. After losing his beacon of strength, he only needed to realize what he could do and use it to subdue his enemies. Infact, this realization comes at a much-needed time. In the war against Thanos, every member of the Avengers especially intergalactic beings liked Thor would have to be on their top form so that they can save Earth and the entire galaxy from the imminent danger of the Infinity Stones. Something similar happened with Peter Quill in ‘Guardians of the Galaxy: Vol 2’. It is good to see that Thor has too discerned his inherent powers and his role as king. Hopefully it will actually make him the ‘Strongest Avenger’.

Other than being a total entertainment package on its own, the third part of Thor also builds up the much-needed momentum for ‘Avengers: Infinity Wars (2018)’. The third Avengers movie has been garnering awe and hype since last year. The addition of many new and vital characters with ‘Thor: Ragnarok’ and the other two Marvel movies this year, only adds up to it.

There is a mid-credit scene (isn’t there always) which involves a standoff of Thor’s ship with a giant alien spaceship. Who it belongs to is a mystery right now. The message on the rumor grapevine is that it’s the ship of Guardians of the Galaxy. If it is indeed Starlord’s ship, we might have witnessed the long-awaited coalition of the ‘Avengers’ and ‘Guardians of the Galaxy.’ If it is true, Thor might end up being the key of joining the two teams in the war against Thanos.

Whatever might or might not happen, one thing is for sure. We now await desperately the arrival of Infinity Wars, where we’ll see our heroes battle against Thanos once and for all. Damn, I think I have goosebumps.

To Compare the actual Movie to the Predictions made in the Trailer Read: