Mahabharat: What was Bheesham’s Great Sin?

By Abhishek Pandeyar2 months ago

In the great war of Mahabharat, Bheesham Pitamah was standing in front of the Pandava, Arjun. The son of the holy river Ganga, Devvrata, who was also known as Bheesham Pitamah, was one of the most formidable warriors of his time. On the ninth day of the great war of Mahabharat, Bheesham stood face to face with one of his grandchildren Arjun, the best archer standing alive on the battlefield. If he so wanted, Bheesham could have obliterated the entire army of Pandavas with one single blow from his bow. But his love and respect for his righteous grandchildren had stopped him till then from making the greatest folly of his lifetime. Nonetheless, on the continual forcing of his demented grandchild and son of the king of Hastinapur, Duryodhan, Bheesham gave into the forces of evil and moved forward to kill Arjun so that Kauravas could win the war. It would have taken one arrow from Bheesham’s quiver to strike down Arjun, had fate not intervened that day. 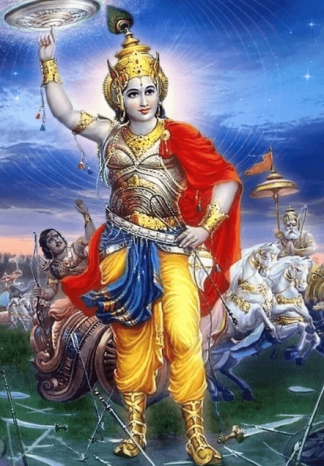 Sensing Bheesham might very well kill Arjun and, with him, the last hope for Pandavas to win, the eighth avatar of Lord Vishnu and the charioteer of Arjun, Shree Krishana stepped down from the chariot. Time stopped around him as the lord of the universe raised his right index finger to call upon his greatest weapon, the Sudharshan Chakra. Everyone was frozen in place, not by shock but due to the powers vested in the human hands of God himself. Only three people were still able to see what was happening, Arjun, Bheesham, and the lord. When Bheesham asked, in a mocking manner, why Shree Krishana had foregone his vow to not use any weapon in the great war, Shree Krishana bellowed in a voice that resounded across the world.

“Bheesham, I am the source of this universe. This world has taken birth from me and resides in me. I am not obligated to the vows of humans as I am not a human. I am neither Krishana nor a member of the human species at this moment but the all-powerful Parbrahma, who permeates through all life. I have created not only this world but also the entire universe. My duty is to nurture life and destroy evil. You Bheesham, and the evil inside you, are coming in front of my duty.”

Shocked to his core, Bheesham got down from his chariot and supplicated in front of Lord Krishana, asking in a solemn but daring way, “My crime must be great, my lord that you have been forced to abdicate your generous self and the solemn vow you had taken. Tell me, O creator of the universe and the destroyer of evil, what my crime is, for I have always sided with good and justice. I made a great vow to never marry in life so that my brothers could have the kingdom of Hastinapur, and no war breaks out amidst family for the throne. In that respect, I have always remained loyal to the throne and have done the duty that God bestowed on me. What injustice then I have done O Lord of Dharma, that the maker of justice himself, is ready to end me?”

Shree Krishana, still holding his favorite weapon, thundered, “You absolutely made a pure vow Bheesham and remained loyal to the throne. But in order to please your family, why did you forego your duties towards humanity? You say you did your part and abdicated the throne so that your family didn’t fight amongst each other. Look around you. What do you think is happening here? Are you not ready to kill your own grandchild? Is family not slaying family in this great war of Bharat?”

“But I have always fulfilled my duties towards good. How can you then say that I have not fulfilled my part?” Bheesham asked, not accepting his defeat in words, forgetting he was standing in front of the creator of words.

“You might have fulfilled your duties towards your family Bheesham but what of the entire world? You had the power to stop the injustice happening with Pandavas and the entire kingdom of Hastinapur. You had the strength to stop the disgraceful act that was committed with your daughter-in-law Draupadi. You even had the opportunity to stop this war by putting Duryodhan in his place. But you didn’t. You made a choice to let your daughter in law be disgraced in an open court. You made a choice to let Duryodhan do as he pleased. That was your great sin, Bheesham, and your undoing.

You didn’t stop Duryodhan because you thought you had some duty towards the throne. No Bheesham, your responsibility was towards your kingdom and your people. Your duty was to serve the good and the righteous. I, the lord of this universe, didn’t give you such immense power just so you could waste it in serving a blind tyrant and his mad son. The moment your vow became an enemy of the good, it had become your duty to break that vow. Time is as fluid as a river, and if one doesn’t change with time, time changes him. But you didn’t, and now I must end your life not for my happiness but for the right of the world as is my duty and burden.”

The realization dawned on Bheesham, and with folded hands, he accepted his defeat and a righteous death at the hand of the creator of the universe. “Kill me O Lord of the universe for I have sinned. In my ego stemming from my superficial vow, I thought I had fulfilled my life’s purpose when I did nothing but run away from my duties. It would be my life’s honor to sacrifice my life in service of the good and donate my soul to the creator of souls himself.”

This confrontation between a human and God teaches us a lot. From the pages of one of the greatest epic world literature has ever seen “The Mahabharat,” it teaches humans to be as fluid as water and be wary of their ego and overconfidence. I am not saying this because I am a Hindu or I believe Shree Krishana was a God. This conversation and its teachings would be equally applicable even if it was between two humans. Divinity does not matter as much as the lesson this instance and many other of this great epic teach us. We can’t stay rigid and immovable like a statue. With time, circumstances change as does the definition of good and evil. What is good today might not be good tomorrow, and what is evil today might be celebrated in the future. Our duties that have been set today might change tomorrow.

What remains fixed is that we must devote our life in service to others and fulfill our responsibilities towards humanity. We must never hurt anyone, physically or mentally, and we should save those who are innocent if we have the power. We should learn from our mistakes and not be fearful in front of death. It is our destiny, our Karma to do our duty in life and not worry about what benefit it might bring us. This is one of the most important lessons of Mahabharat and the Bhagavad Geeta.

Even if you learn just one thing today, try to learn this.